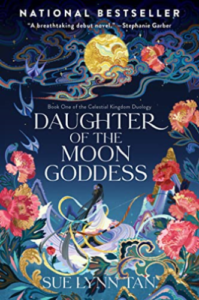 Daughter of the Moon Goddess is an enchanting tale of romance, friendship, treacherous battles, and so much more. This book is inspired by Chinese mythology and the legend of the moon goddess Chang`e. Xingyin’s mother is the moon goddess, banished for betraying the Celestial Kingdom. Xingyin is unaware of this until her magic briefly flares up and she has to flee as not to be found by the Celestial Emperor. Before she leaves, she makes a promise to set her mother free.

Xingyin successfully escapes to the one place she should not go, the Celestial Kingdom. There she meets Crown Prince Liwei, son of the Celestial Emperor. She and Liwei study alongside each other for many years, developing a friendship. But when the Celestial Emperor announces Liwei’s engagement to another, Xingyin chooses to leave and live her life for herself. She joins the Celestial Army, following her father in being a legendary archer. This is not where her story ends, but where it begins.

Daughter of the Moon Goddess is a spellbinding read. Sue Lynn Tan does an extraordinary job of making you feel like you are part of the story. It truly is such a beautiful story of adventure and courage. This book is part of a duology, the second book comes out this November! Heart of the Sun Warrior is a continuation of Xingyin’s story, hopefully it is just as amazing as the first book.